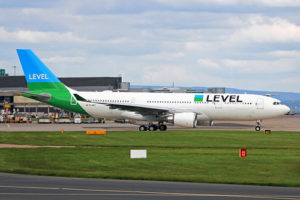 Following the recent successful launch low-cost airline LEVEL selected A330-200 aircraft as a tool for further operations, according to the press service of Airbus. According to the company, IAG has chosen LEVEL for another three Airbus A330-200 aircraft. The three new aircraft will be delivered in summer 2018 and will be used to expand the airline’s route map.

The company has said bookings are well ahead of expectations and the brand is appealing to many people who have not previously considered long haul. It is looking at opening further bases, with Paris and Rome among the options under study.

“Long-haul flights are now available to many people for the first time”, said the IAG chief, Willie Walsh. “We’re extremely pleased with the customer response in all of Level’s markets. The extra aircraft will enable it to expand without elaborating”, added he.

The airline LEVEL began services from Barcelona in June, with routes to Los Angeles, San Francisco (Oakland), Punta Cana in the Dominican Republic and Buenos Aires, Argentina. It operates two new planes Airbus A330-200, capable to transport up to 293 people in an economy class and up to 21 passengers in a premium economy class.