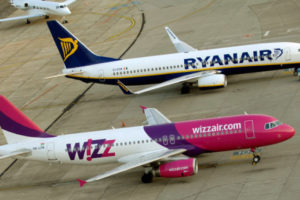 The low-cost airlines Ryanair and Wizz Air continue to stop regular flights on routes in Bulgaria. Over the last two years the two carriers have competed for the Bulgarian airports and regularly announce new routes. But now the trend is turning and airlines are starting shrinking destinations due to demand seasonality.

Ryanair cease flights between Plovdiv and Brussels (Charleroi) and Milan (Bergamo) from early November. Ryanair runs flights on these routes every Monday and Friday. Termination of flights is due to commercial reasons. It is still unclear whether flights will be resumed next summer, as Ryanair is currently working on the program.

It is unknown whether new routes are being prepared between Plovdiv and other airports. However, the Irish carrier retains flights between the city and London’s Stansted Airport, which is one of Ryanair’s strongest routes in the winter. There will be 4 flights a week – Monday, Wednesday, Friday and Sunday.

In early July it became clear that Wizz Air, the other large low-cost carrier, has reduced the number of destinations it serves from Bulgaria. The Hungarian airline confirmed that they stop flights on 8 routes from Sofia and Varna because of insufficient demand.

These are the routes from the Bulgarian capital to the Italian airports of Catania and Naples, the German Nuremberg, the Swiss Basel, the Greek in Athens and the Spanish in Malaga. The airline will not fly from Varna to Tel Aviv and Milano (Bergamo) in the next few months.

Since early November, Wizz Air has also stopped the route between Sofia and Varna.

The low-cost carrier has pledged to resume flights in the summer of 2019.

Wizz Air has also drastically reduced its lines to the United Kingdom since early November. Due to weak interest, the airline shuts down flights from Sofia to Birmingham, Bristol and Doncaster / Sheffield.

During the winter season the low-cost carrier retains flights from the Bulgarian capital only to one destination on the island – London Luton Airport.