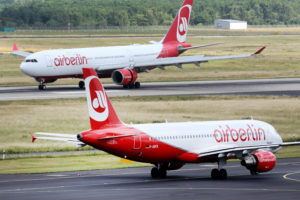 Lufthansa acquires most of the assets of the bankrupted airline Air Berlin. The volume of investments will be 1.5 billion EUR. In exchange, the largest airline in Germany will receive 81 Air Berlin aircraft, as well as employ 3,000 former employees of the low-cost company.

“Lufthansa never concealed that intensively engaged in the development of measures that could help the leading air carrier of Germany cope with entering the Air Berlin market”, said the CEO of Lufthansa, Carsten Spohr. “It would be wrong to say that Lufthansa will dominate the market, since its share in the global air transportation market is only 3%, while on Europe market are 14%”, added he.

The transaction is scheduled to be completed by October 12.

Prior to its bankruptcy, the airline restructured to minimize its costs. Air Berlin leased part of its fleet to Lufthansa. However, over the past six years, the losses of Air Berlin amounted to 2.7 billion EUR and the net debt was 1.2 billion EUR. After the announcement of the bankruptcy of the airline, the German government allocated a 150 million EUR bridge loan for its support.