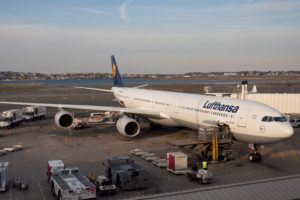 Lufthansa Airbus A340-300 emergency landed on Manchester Airport after a woman gave birth on board. Flight crews and attendants dealt with the drama during the trans-Atlantic passenger flight and luckily three doctors were on board to help with the delivery. The plane was travelling from Bogota in Colombia to Frankfurt and was grounded at the UK airport Manchester on Wednesday, where the mum and her newborn were then taken to a local hospital for further care.

“Lufthansa can confirm that a passenger gave birth to a baby on board during the flight LH543 from Bogotá on the way to Frankfurt. Three doctors were on board and supported the crew during the delivery”, said the spokeswoman of Lufthansa. “In order to give the best medical care and assistance to the mother and baby the crew decided to divert the flight to Manchester, where it landed at 1.09pm local time”, added she.

The Lufthansa plane Airbus A340-300 with 190 passengers continued its journey after refueling and safely arrived in Frankfurt.

Airbus A340 is a long-range, four-engine, wide-body commercial passenger jet airliner developed and produced by the European aerospace company Airbus. The A340 was assembled in Toulouse, France. It seats up to 375 passengers in the standard variants. It has a range of 6,700 to 9,000 nautical miles. Its distinguishing features are four high-bypass turbofan engines and three-bogie main landing gears.