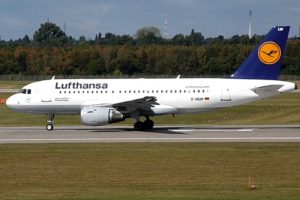 Lufthansa aircraft Airbus A319-114 suffered engine failure on departure from Nice-Cote d’Azur Airport in France. Shortly after takeoff the crew noticed a noise and flames emitting from one of the CFM56-5 engines. The pilot informed the airport for the accident and turned off the troubled engine. The aircraft circled for a safe landing on runway 04R several minutes later. Fortunately there were no reported injuries and damaged during the accident. Also no emergency was declared on the airport and crew followed the safety procedure for landing with one engine only.

All the passengers were disembarked at the terminal and rebooked for another flight.

The aircraft was detained on the ground for safety inspection and safety checks.

Airbus A319 is a member of the Airbus A320 family of short- to medium-range, narrow-body, commercial passenger twin-engine jet airliners manufactured by Airbus. The A319 carries up to 160 passengers and has a maximum range of 3,700 nautical miles.

The Airbus A319-100 operate a variety of domestic and European routes. This aircraft features Lufthansa’s Europa Cabin which has one additional row and thinner seats than previous. Airbus A319 operates in a Business and Economy Class configuration. The number of seats per cabin is variable and may have as few as three rows of Business Class to a maximum of eight.