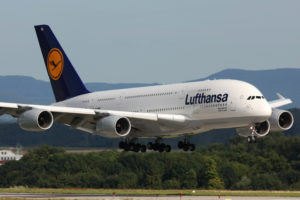 Lufthansa airlines carried almost 12 million passengers in June 2017, representing an increase of 18% yoy. The indicator of the maximum passenger turnover, measured in chair-kilometers, increased by 12.3% compared to the previous year, while sales increased by 15.9%. The aircraft load factor also increased by 2.6 percentage points, while compared with June 2016 to 82.8%. The price conjuncture, taking into account changes in exchange rates, was favorable in June 2017.

The freight capacity increased by 2.9% in comparison with the previous year, while the volume of sales of freight traffic (performed ton-km) increased by 8.1%. As a result, the coefficient of commercial load for June showed an appropriate increase – by 3.3 percentage points. According to the results of the first six months of 2017, the freight capacity indicator was 2.9% higher than in the previous year, and the volume of cargo transportation increased by 7.1%, which led to an increase in the commercial load factor by 2.7 percentage points.

Deutsche Lufthansa AG, commonly known as Lufthansa is the largest German airline and also the largest airline in Europe. It operates services to 18 domestic destinations and 197 international destinations in 78 countries across Africa, the Americas, Asia, and Europe, using a fleet of more than 270 aircraft.