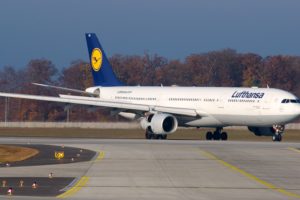 The Lufthansa airplane Airbus A330-300 made emergency landing in Cyprus after unusual odor in the cabin, caused by a breakage of the on-board coffee maker. The aircraft with 186 passengers was en route from Munich (Germany) to Riyadh (Saudi Arabia), but on 90 miles west of Larnaca suffered smoke in the cabin and unusual odor. The crew decided to divert to Cyprus, where safely landed on Larnaca’s runway 22. The passengers were evacuated, after which it became clear that the source of the smell was a faulty of the coffee machine.

The aircraft is currently being examined, it is being checked whether the removal of the coffeemaker would permit continuation of the flight.

Fortunately during the accident there were no injured people and no reported damages. The safety inspectors will check the airplane before release returning in operations.