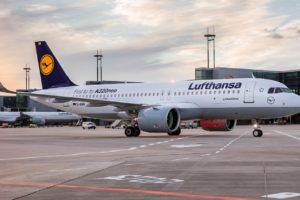 Lufthansa Group used the option in its contract for Airbus A320neo to order another six airplanes. The decision was taken by the company’s supervisory board in early May 2018.

“Benefiting from the Airbus commonality and the A320 family’s efficiency and environmental credentials such as reduced noise, lower fuel-burn and emissions, we are pleased the airline has decided to come back for more”, said the CEO of Airbus, Eric Schulz.

The Airbus A320neo family is a development of the A320 family of narrow-body airliners, launched on 1 December 2010 by Airbus. They are essentially a re-engine; neo stands for new engine option, with a choice of CFM International LEAP-1A or Pratt & Whitney PW1000G engines.

Newer PostBoeing 767 suffered engine failure after take off from Munich Airport in Germany
Older PostRevenue of the Russian airline Aeroflot increased by 8.5% in Q1 2018