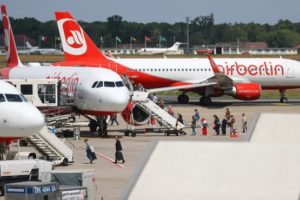 German national airline Lufthansa may acquire 90 of the 140 aircrafts of the bankrupt Air Berlin and its Austrian subsidiary Niki. A deal could be completed during the next week. If everything goes smoothly, Air Berlin might be fragmented already in September.

Lufthansa will start negotiations with the bankruptcy banker Lucas Flotter and the Air Berlin board of directors. The talks should specify how much of the routes, planes and employees of the bankrupt company are to be taken.

According to officials and news sources, Lufthansa has been secretly preparing for the bankruptcy of Air Berlin for nearly an year and is now developing only a detailed plan. The German government backed plans for a 150 million EUR transitional loan, despite the competition protests and protests by rivals such as Irish Ryanair.

Earlier in the day, Chief Executive Officer Thomas Winkelmann told that Air Berlin was negotiating with three potential buyers for the sale of its assets. Winkelmann did not revealed the names of the companies, but emphasized that they “are financially strong and sufficiently large to offer a safe future for Air Berlin”. Countries will also be interested in continuing to work from Germany, he added.

The second largest German airline started a bankruptcy procedure earlier this week after its main shareholder Etihad Airways from the United Arab Emirates withdrew its financial support. The German government provided Air Berlin with a 150 million EUR bridge loan to enable the carrier to continue operating.