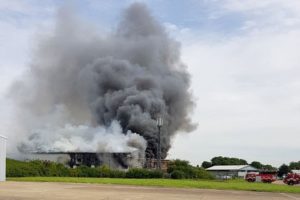 Major fire erupted in Southend airport in Essex, near London, UK. It was followed by explosion. Thick black smoke could be seen billowing from an aircraft hangar at the airport in the Essex seaside town, which airport was used mostly for charter flights. The fire broke out in one of the hangars of the airport, which, according to eyewitnesses, was preceded by an explosion.

The local authorities took immediate actions to restrict the fire and at the scene were sent group of firefighters with six fire engines. A total of eight crews have been sent to the scene from Southend, Rayleigh, Rochford, Shoeburyness, Hawkwell and Chelmsford.

The smoke was said to be emerging from an Air Livery hanger on the north side of the site, although the Southend airport was still running a normal service today.

“I spoke to airport staff and they said it was a fire at one of the hangers on the perimeter of the airport”, said an eyewitness to Daily Mail. “I could see the flames from the terminal – they were not particularly high but it was really thick black smoke”, added he.

Easyjet and Flybe operate out of Southend Airport, which is located 40 miles east of London. The airport operates flights to and from the likes of Spain, Holland, Germany, Portugal, Switzerland, Malta and France. The investigation for the root cause of the accident is under way.