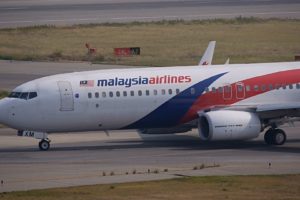 Malaysia Airlines Boeing 737-800 rejected takeoff from Shanghai Pudong airport at high speed due to burst tyres. The aircraft was accelerating to takeoff from from Shanghai Pudong (China) en route to Kuala Lumpur (Malaysia), but the both left main tyres bursted with pieces of the tyres penetrating the fuselage. The pilot rejected the takeoff at high speed and fortunately succeeded to stop the plane at the runway without suffering excursion. The emergency services were deployed at the scene of the accident and foamed the landing gear.

The passengers were disembarked from the aircraft and returned to the terminal, where were rebooked for another flight. No reported injuries among the people on board, but aircraft sustained substantial damage.

Investigation for the root cause of the accident is under way.

The Boeing 737 is a short- to medium-range twinjet narrow-body airliner developed and manufactured by Boeing Commercial Airplanes in the United States. Originally developed as a shorter, lower-cost twin-engine airliner derived from the 707 and 727, the 737 has developed into a family of thirteen passenger models with capacities from 85 to 215 passengers. The 737 is Boeing’s only narrow-body airliner in production, with the 737 Next Generation (-700, -800, and -900ER) and the re-engined and updated 737 MAX variants currently being built.