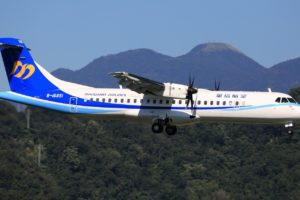 Mandarin Airlines plane ATR-72-212A lost of cabin pressure at the approach to Hualien in Taiwan. The aircraft was performing a flight AE-7931 from Kaohsiung to Hualien with 48 passengers and 7 crew when oxygen masks were released after indication for loss of cabin pressure. The crew initiated an emergency descent to 5000 feet and continued to Hualien for a safe landing about 25 minutes later. There were no reported injuries during the incident. All the people were disembarked at the terminal, but the plane was grounded for further inspection and repairs.

The return flight of the Mandarin Airlines plane ATR-72-212A was canceled.

Taiwan’s Aviation Safety Council opened an investigation into the incident.

ATR 72 is a twin-engine turboprop, short-haul regional airliner developed and produced in France and Italy by aircraft manufacturer ATR (Aerei da Trasporto Regionale or Avions de transport regional), a joint venture formed by French aerospace company Aerospatiale (now Airbus) and Italian aviation conglomerate Aeritalia (now Leonardo S.p.A.). ATR-72-212A was certified in January 1997 and fitted with either PW127F or PW127M engines. It is an upgraded version of the −210 using six-bladed propellers on otherwise identical PW127F engines. Other improvements include higher maximum weights and superior performance, as well as greater automation of power management to ease pilot workload.