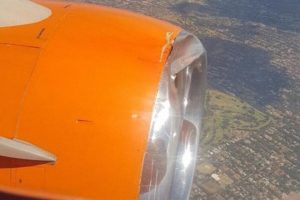 Mango Airlines Boeing 737-800 impacted with bird during climbing from Johannesburg Airport en route to Cape Town in South Africa. The airplane with 179 people on board took off from Johannesburg’s runway 03L, when a bird impacted the left hand engine inlet, causing a dent at the engine. The engine air inlet cowling suffered a large dent and the smell of smoke was noted in the cabin after the event. The pilot stopped the climb and decided to return to the departure airport for a safe landing about 25 minutes later. For

The Mango Airlines Boeing 737-800 landed safely and was detained for safety inspection and assessment of the damage. Fortunately during the accident there were no reported injuries.

All the passengers of the aircraft were rebooked for another flights.

The Boeing 737 is a short- to medium-range twinjet narrow-body airliner developed and manufactured by Boeing Commercial Airplanes in the United States. Originally developed as a shorter, lower-cost twin-engine airliner, the 737 has developed into a family of ten passenger models with capacities from 85 to 215 passengers. The 737 is Boeing’s only narrow-body airliner in production, with the 737 Next Generation (-700, -800, and -900ER) and the re-engined and redesigned 737 MAX variants currently being built.