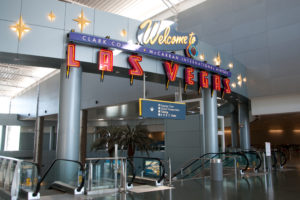 McCarran International Airport in Las Vegas partially restored work after the shooting incident in Mandalay Bay hotel, which caused death of 50 people with over 200 wounded. The airport first advised its passengers that some flights “will be affected” and said delays are to be expected. Later it tweeted saying all flights in and out of the airport “have been temporarily halted” following the reported shooting on the Las Vegas.

Nearly two dozen of flights to McCarran International Airport were diverted to other airports overnight, affecting thousands of passengers.

“If traveling Monday morning, please check status with your airline”, says the statement of the Las Vegas airport.

Earlier, gunman turned a Las Vegas concert into a killing field, murdering at least 50 people and sending more than 400 others to hospitals in the deadliest mass shooting in modern United States history. The gunman, who fired down on the Route 91 Harvest Festival from a room on the 32nd floor of the Mandalay Bay hotel, died from a self-inflicted gunshot wound just as police made entry to room.

The man was not part of terrorist group, but police started investigation for the accident and was searching for woman related to him. This was the reason for closing of many road and international airport.

McCarran International Airport is the primary commercial airport serving the Las Vegas Valley, a major metropolitan area in the US state of Nevada. It is located in Paradise, about 8 km south of Downtown Las Vegas. The airport is owned by Clark County and operated by the Clark County Department of Aviation. It is named after the late US Senator Pat McCarran, a member of the Democratic Party who contributed to the development of aviation both in Las Vegas and on a national scale.