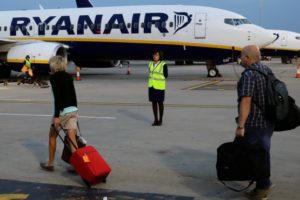 MEPs call for better protection for airline passengers after Ryanair cancelled thousands of flights and caused real crisis in European aviation market. Many EP representatives indicated that passengers were not fully informed about the possibilities of compensation and all the redirection alternatives they are entitled to. According to them, companies responsible for violating the rules should be held accountable, while others called for more effective sanctions.

Some MEPs even urged the Council to unblock the negotiations on the review of passenger rights and to start negotiations with European Parliament, which is ready for its position in 2014. They also urged the EC to investigate working conditions for low-cost airlines.

“Competitiveness can not be at the expense of employees’ rights. The poor working conditions can become a safety issue”, said some MEPs in the parliament.

In mid-September, Ryanair announced cancellation of 18,000 flights in the upcoming winter season, affecting the interests of around 400,000 passengers. The company explained this decision by reducing the fleet of 25 airplanes during the winter. Ryanair offers affected passengers either new flight options or return of money.

One of the main problems of the company is that it uses a schedule starting on March 1 of a given year. Within one year, each pilot is entitled to 900 hours in the air, and for the other companies the calendar year begins on January 1, leaving less time for the busy summer season. It was a hole in the regulations Ryanair had managed to avoid, but now it seems to be clogged and that’s why Ryanair has to make a significant reduction in its number of flights in winter.

A week later, the Irish airline announced it would cancel another 18,000 flights in addition to those by the end of October. The new measures will affect half a million passengers and are between November and March next year.