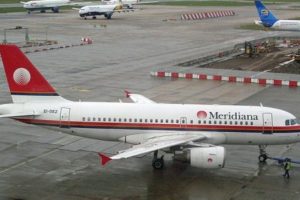 Meridiana Fly wants to challenge Alitalia and become the flagship of the Italian air market. The airline will rebrand its aircraft and operate with more remarkable name – Air Italy. The second-largest Italian carrier, which main shareholder (49%) since September 2017 was Qatar Airways, has announced new development plans.

First, it will change the name to Air Italy and rebrand its fleet. The company has already implemented a new scheme for painting its aircraft: their livery will have elements of burgundy color, which is the dominant color of the Qatar Airways brand.

Second, a significant fleet renewal is planned by 2020, as 50 new aircraft will be received. Also, the network of routes will expand, primarily long-haul, in the directions of North America and Asia. Air Italy will fly through Italy to 50 destinations (among them are already named Naples, Palermo and Catania).

In June will be launched flights to New York and Miami, while in September – to Bangkok. By 2022 the passenger flow of Air Italy should grow almost 5 times and reach 10 million people.

As the president of Air Italy, Francesco Violante, said that the airline aims to challenge Alitalia, Italy’s former flagship airline, which is now in a state of pre-bankruptcy and is negotiating with potential buyers, including Lufthansa and the British EasyJet.

The base airport of the carrier will be Malpensa in Milan. The expansion of the activities of Air Italy will also stimulate the development of this airport: a premium lounge for transit passengers will be opened, the number of check-in counters will increase and new facilities will be created in waiting rooms.