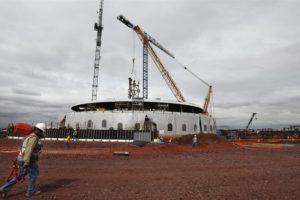 Mexican citizens rejected a proposal for building of a new airport worth 13.3 billion USD. It was assumed that the New Mexico International Airport, which is completed by about 30%, will be located to the northeast of the Mexican capital, on the site of Lake Texcoco.

The elected president of Mexico, Andres Manuel Lopez Obrador, who organized the voting, said that he would fulfill the will of the people, although the voting results are not mandatory. He called the project of the new airport of the work of the British architect Norman Foster a waste of money for a country with such social problems.

More than 1 million Mexicans participated in the voting. Most of them (747,000) voted in favor of the alternative proposed by the elected president, which presupposes the retention of the existing airport of Mexico and the construction of a new terminal and two runways at the military base in Santa Lucia. Andres Manuel Lopez Obrador claims that this project will be much cheaper.

The vote was controversial on a number of points. On the one hand, it was not a full-fledged referendum – less than 1% of the population voted. On the other hand, a small part of the population that does not have the necessary technical training made it possible to solve the complex issue of the infrastructure of one of the largest cities in the world.

For the construction of the new airport, already were raised 6 billion USD of debt. The abandonment of the project will allow the holders of these bonds to demand immediate repayment of the debt.