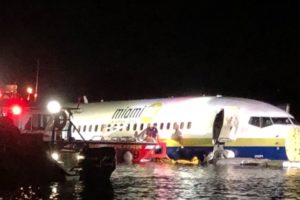 Miami Air Boeing 737-800 experienced a runway overrun upon landing at Jacksonville Naval Air Station in Florida. The aircraft was performing charter flight BSK293 from Cuba’s Leeward Point Field at Guantanamo Bay with 133 passengers and 7 crew members on board. During landing the plane failed to reduce speed due to bad weather and wet runway, which caused overrun and came to rest in the shallow waters of St Johns River, sustaining substantial damage. Fortunately, there were no reported casualties and serious injuries. All the passengers were evacuated through the aircraft wings.

The aircraft was engaged in a charter flight to bring military personnel and family members home. At the time of landing a thunderstorm was active in the area. The investigation for the root cause of the accident is underway. They are now looking into the failure of the “thrust reverser”, as well as a request by the pilot to change runways.

Rescue teams are now working to control the jet fuel in the water and searching for two dogs and a cat that are still unaccounted for. Authorities must wait until the remaining fuel – around 1,200 gallons (4,500L) – is removed before attempting to salvage any evidence.

Investigators have obtained the flight data recorder but the cockpit voice recorder remains in a submerged area of the plane.