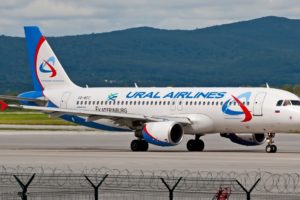 Mobile stairs platform collapsed during the boarding of passengers on board of Ural Airlines plane Airbus A320-200 at Barnaul airport in Siberia, Russia. The aircraft was boarding passenger for flight U6-652 from Barnaul to Moscow Domodedovo, but the upper part of the airstair broke and people staying on it fell down onto the apron. Following the accident, 6 people receiving non-life threatening injuries and 4 of them were taken to a hospital.

The boarding was canceled and the aircraft departed from Barnaul airport with a delay of 2 hours, arriving successfully in Moscow Domodedovo.

West Siberia’s Transport Prosecutor’s Office opened a criminal case and initiated an investigation for the accident.

The incident was caught on camera:


Ural Airlines is an airline based in Yekaterinburg, Russia, operates scheduled and chartered domestic and international flights out of Koltsovo International Airport. In 2016, the company transported 6.5 million passengers.

Barnaul Airport is a major airport in Altai Krai, Russia located 15 km west of Barnaul. It contains large facilities and a remote tarmac for military use. The airport services airliners and helicopters of all sizes, including planes as large as the Boeing 747, and the Il-96.