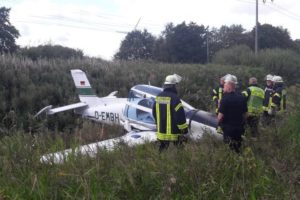 Single-engine aircraft Morane-Saulnier MS883 crash near Leer-Papenburg airfield in Germany, causing the death of the 82-year-old pilot. The accident was reported by nearby witnesses, who saw the falling plane. The first emergency personnel arrived a few minutes later. They found the 82-year-old pilot, who was alone with his dog in the plane. The emergency physician could only determine his death. Since no fire had broken out and no large quantities of fuel leaked out, the fire brigade did not have to intervene. However, the emergency personnel blocked the access road to the accident site and continued to ensure the fire protection.

The dog survived the crash. A veterinarian took care of it and took it to Heede in an animal clinic.

At the scene arrived also inspector from the Federal Air Force Inspectorate to investigate the root cause of the crash. Salvage of the injured machine can only be carried out after completion of the tests and investigation. The root cause of the crash is unclear. It is clear that the single-engine aircraft Morane-Saulnier MS883 took-off from Norderney around 11:20 and the flight should go to Oldenburg after a tankstop in Nittermoor in Leer-Papenburg.