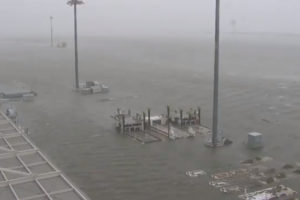 More than 600 domestic flights were canceled in Japan due to the typhoon Jebi, which is approaching the west coast of the country. It is expected the storm to be the most powerful one in the last 25 years.

Meteorologists report that the wind speed in the epicenter is 160 km/h with gusts up to 215 km/h. According to forecasts, the height of waves can reach 12 meters, the level of precipitation per day can exceed 500 mm. The authorities insist on the evacuation of almost 1 million residents of the cities Kobe and Osaka. The typhoon has already reached the island of Shikoku and continues to move towards Honshu.

Prime Minister of the country Shinzo Abe canceled the planned trip to the southernmost island of the Japanese Kyushu archipelago in order personally to lead the fight against the typhoon Jebi.

The typhoon flooded a major airport on a man-made island and leaving a trail of destruction. At least one person was killed and dozens more are injured.