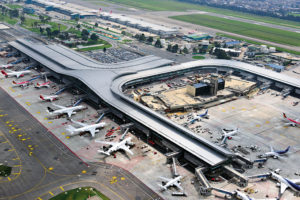 More than 1,300 turtles were confiscated at the international airport of Bogota in Colombia. the smugglers were going to illegally export the reptiles abroad for sale.

“The turtles were kept in poor conditions, they were in plastic bags without air. As a result, 28 reptiles were killed and the rest were taken to the Center for Wild Flora and Fauna”, said Oscar Lopes, Secretary of Environmental Protection of Bogota. He added that after the rehabilitation, they will be returned to their natural habitat.

Confiscated turtles, which belong to the species Chelus fimbriatus, are very popular both in Colombia and around the world due to their unusual appearance. These animals attract the special attention of collectors, many keep them as pets.

The flattened triangular head with a soft proboscis and a long neck with rows of leather outgrowths give a bizarre look to the fringed turtle. The same outgrowths are found on the throat and chin of the animal. It serves amphibian camouflage, making it look like a mossy tree trunk.

Colombian customs officials have not for the first time confiscated a party of rare fauna. For example, in April, a cargo of rare poisonous frogs Oophaga lehmanni, which the smugglers intended to export to Germany, was detained at the Colombia capital’s airport. According to the International Union for Conservation of Nature, this type of amphibian is endangered.

In February, smugglers attempted to export 10 copies of Mantis religiosa and 12 crabs to the USA through the same air terminal. Last year, 23 tarantulas were confiscated there, heading for the South Korean capital Seoul, as well as 540 sea cucumbers – representatives of the invertebrate class of sea animals such as echinoderms.