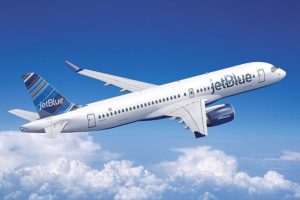 The European aircraft manufacturer Airbus has signed solid contracts with Moxy and JetBlue for the purchase of 120 A220-300 aircraft (formerly Bombardier CS300).

The American startup airline Moxy, has signed a firm contract for the purchase of 60 A220-300 aircraft.

“Moxy is a new airline under the leadership of David Neeleman, one of the most innovative entrepreneurs in the industry and the founder of JetBlue Airways. In addition to JetBlue, David Neeleman also founded Azul Brazilian Airlines and is the controlling investor in TAP Air Portugal”, noted Airbus.

In addition, JetBlue Airways has confirmed a firm contract to acquire 60 aircraft. JetBlue’s existing Airbus fleet includes 193 A320 and A321ceo aircraft in operation, with an additional 85 A321neo aircraft on order.

Airbus will produce A220-300 aircraft at a new US assembly plant in Mobile, Alabama. Construction of the plant, located next to the existing assembly complex Airbus A320, will begin at the end of this month.

The A220 is the only aircraft purpose-built for the 100-150 seat market and delivers unbeatable fuel efficiency. Passengers continuously rate the aircraft cabin highly as it seems to offer the space and comfort of a widebody type of aircraft, yet in the single-aisle aircraft.