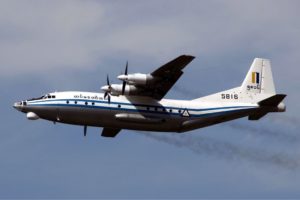 Myanmar military aircraft Y-8 with 122 people aboard disappeared over Andaman Sea on 20 miles west from the city of Dawei. The airplane had on board mostly military personnel and members of their families, being en route from from the town of Myeik in the direction of Yangon, but disappeared from the radars on June 7 at 13.35 local time, just 29 minutes after taking off.

“The communication with airplane discontinued around 1:35 am (0705 GMT), when the plane was about 20 miles west of Dawei”, said the Burmese army commander’s office.

Of the 122 people on board, 108 were passengers and 14 were crew, being part of a regularly scheduled military flight to Yangon.

Burmese army says that debris and bodies have been found in the Andaman Sea. The search teams found 10 bodies, including that of a child, as well as a wheel, several life jackets and some luggage. The main part of the plane has not yet been found.

The reason for the crash remains unclear. There has so far been no report of a mayday call and the dispersed nature of the wreckage suggests it could have broken up in mid air.

The Shaanxi Y-8 or Yunshuji-8 airplane is a medium size medium range transport aircraft produced by Shaanxi Aircraft Corporation in China, based on the Soviet Antonov An-12. It has become one of China’s most popular military and civilian transport/cargo aircraft, with many variants produced and exported.