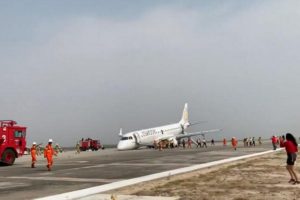 Myanmar National Airlines plane Embraer ERJ-190 made a forced landing at Mandalay International Airport with the nose landing gear retracted. The plane was performing a flight UB-103 from Yangon to Mandalay with 82 passengers and 7 crew, but at the approach, the pilot received an indication for a problem with the nose gear. The aircraft flew several times in front of the control tower for visual inspection and finally, the crew prepared for a nose gear up landing. The aircraft landed on Mandalay’s runway 17, keeping the nose up as long as practicable. However, the nose landing gear failed to deploy, bringing the aircraft to a halt on the runway on both main gear struts and the nose of the aircraft.

Smoke entered the cabin after the nose touched down. The aircraft was evacuated via slides. The incident caused panic among the passengers, although it resulted in no injury. However, the aircraft sustained substantial damage.

“The plane has landed in the middle of the runway at Mandalay Airport. The runway is 14,000 ft and the plane landed at 5,000 ft”, said the deputy director general of DCA, U Ye Htut Aung.