The NASA revealed the incredible image of a galaxy at the center of powerful multicolored emissions originate.

The scientists discovered that the source comes from a super-massive black hole that throws powerful jets of high-energy particles.

The NGC 4258 galaxy, also known as M106, is located 23 million light years from Earth, a short distance in galactic dimensions.

It has a spiral shape, as well as our Milky Way, but it shows two additional ‘arms’ that cross the plane of the galaxy and shine in X-rays, optical light and radius.

These strange arms, which NASA compares with fireworks, were captured thanks to four observation filters: the blue was obtained by the X-rays of the Chandra Observatory , the purple by the Karl Jansky telescope of the National Science Foundation, the red by the data infrared of the Spitzer space telescope, and yellow/white by the optical data of the Hubble space telescope.

According to a new study conducted with the Spitzer, what is seen are shock waves, similar to the explosions generated by supersonic airplanes, which heat up as much gas as the mass of 10 million soles. 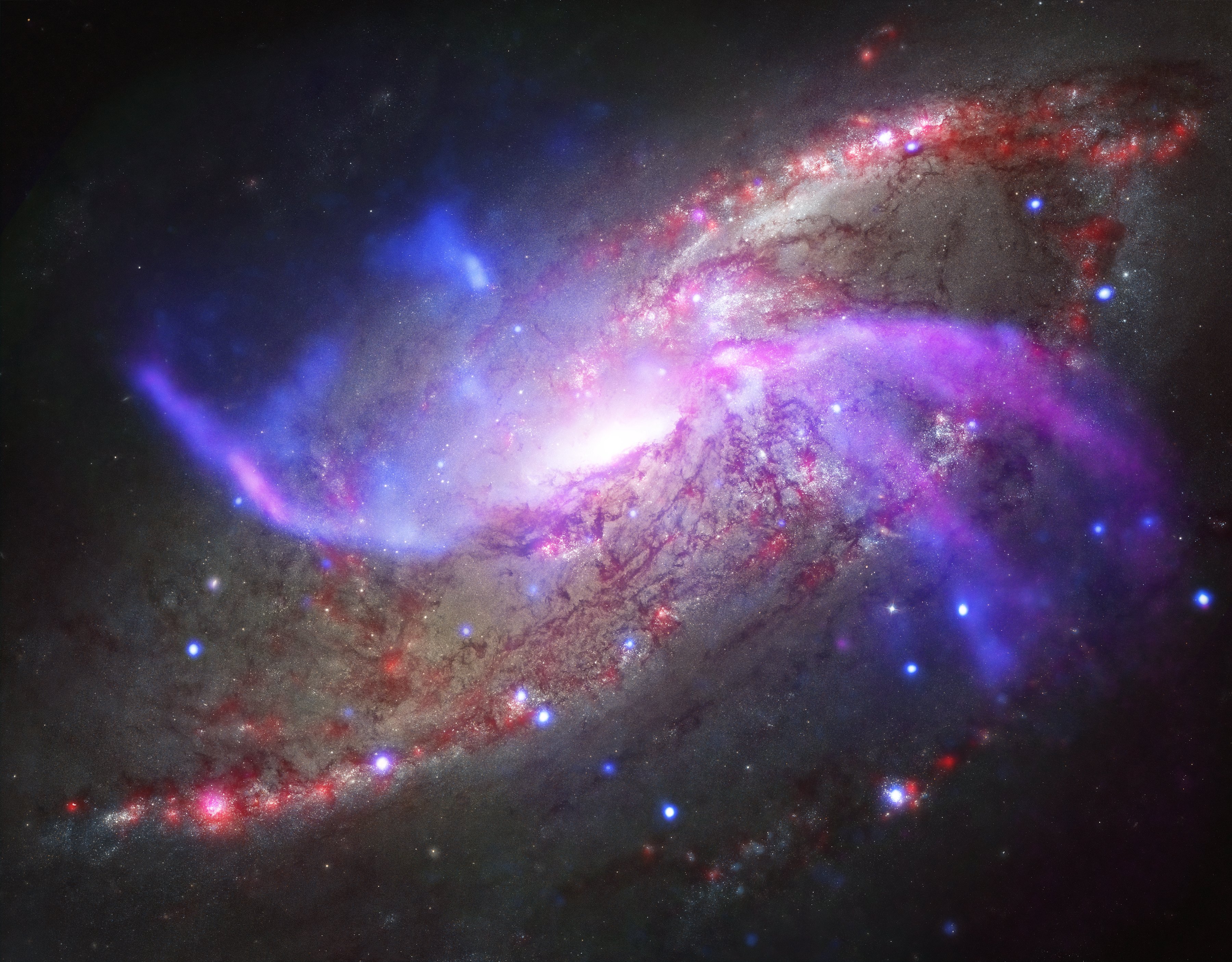 Scientists believe that the only source capable of causing this chaos is the gigantic black hole that inhabits that region.

A black hole is an extremely dense region of space, with a gravity so strong that not even light can escape it. When these objects feed on stellar matter, they can expel large amounts of energy through their poles.

Like every galaxy, M106 has a super-massive black hole in its center.

This giant, which has a mass as large as 33 million times that of our Sun, is producing powerful energy jets that hit the disk of the galaxy and generate shock waves.

These, in turn, heat the gas (mainly hydrogen) to thousands of degrees Celsius.

In a statement, NASA explains that this gas expulsion in the galaxy will continue to run out in the next 300 million years, unless some event stops the activity of the black hole .

The situation is critical because most of the gas in the disk has already been expelled, which will cause fewer and fewer stars to form.

In fact, scientists confirmed that the rate of star formation is ten times lower than in the Milky Way.

Similarly, subsequent observations revealed that the mass of the remaining gas is ten times smaller than previously estimated.

If you take into account the remaining stars will eventually die, it could be deduced that the end of the M106 galaxy will arrive earlier than expected.