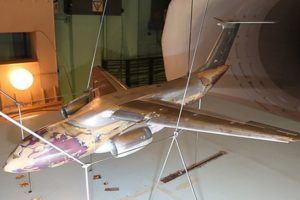 The specialists and engineers of the US space agency NASA and the aircraft company Lockheed Martin are developing ultra-quiet supersonic aircraft that will be able to overcome more than 5,500 km (from London to New York) in three hours and climb to a height of 16,600 km. The publication notes that according to the calculations of engineers, the maximum level of noise produced by the aircraft will not exceed 60-65 acoustic decibels.

The first tests of a reduced model of an airplane in a wind tunnel were carried out by Lockheed Martin and NASA in June this year. Now NASA is looking for an investor who will be ready to invest about 390 million USD in development and testing of a full-sized aircraft model within five years. In addition, the funding of one year of work is included in the budget plan of US President Donald Trump for the fiscal year 2018.

It is assumed that the length of the aircraft will be 28.60 m, and the noise produced by it will be comparable in volume with the noise of a luxury car engine moving at high speed along the highway. The cockpit will be designed for one person. The first tests are scheduled for 2022.

In 2015, Airbus received a patent for the supersonic passenger liner Concord-2, which can fly from London to New York in one hour. According to the patent, “Concord-2” is intended for military purposes and it is not yet known whether commercial flights will be made on it. At the same time, it can accommodate 19 passengers.

In total, only two types of supersonic aircraft were used for commercial transportation of passengers, but both were decommissioned after disasters – the Soviet Tu-144 in 1978, the Anglo-French Concorde in 2003.