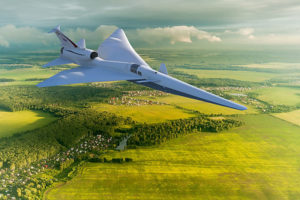 NASA released video of the promising “quiet” supersonic passenger aircraft X-59, the development of which the agency commissioned by the American company Lockheed Martin in the framework of the project QueSST. The tests have been conducted in a low-speed wind tunnel at the NASA Langley Research Center since 2017. Currently, experts are engaged in the study of aerodynamic stability, maneuverability and controllability of the model of a supersonic aircraft in subsonic air flow.

The tests are necessary to evaluate the aerodynamic characteristics of promising aircraft by simulating their flight at different speeds and in different states of the surrounding air flow. Obtained from the results of such tests, the data subsequently allow to make changes to the design of the aircraft, in order to improve its aerodynamic characteristics. Testing models of aircraft are usually carried out in a wind tunnel at different speeds of air flow and with imitation of various flight conditions.

In the video, published by NASA, the model of the X-59 supersonic aircraft is being tested by yaw, pitch change and roll. In addition, experts have shown purge tests of the model aircraft at high angles of attack with the visualization of air flow using smoke and laser lights. According to the results of the tests, NASA experts intend to collect data, which can then be taken into account in the aircraft design. As expected, in 2019, Lockheed Martin will begin building the first flight model, the X-59.

The QueSST project involves the development of an aircraft with a glider of such an aerodynamic structure in which the smallest possible number of shock waves would form on the surface of an aircraft. In this case, those waves that will still be formed should be less intense. Ultimately, the developers plan to significantly reduce the noise of supersonic aircraft and, thus, to achieve the lifting of the ban on flights of supersonic aircraft over populated parts of the land.

A prospective passenger aircraft based on the X-59 will be required to carry out cruising flights at an altitude of 16,800 meters at a speed of 1,500 km/h. At the same time, the perceived noise level from such an aircraft on the ground should not exceed 75 decibels, which in terms of volume approximately corresponds to a slamming car door. According to the NASA agreement with Lockheed Martin, the year 2021 is defined as the early start date of flight tests, which can be shifted, but not later than mid-2022.

In 2023, the new X-59 supersonic aircraft will begin to perform supersonic test flights over volunteer settlements. The task of the residents of these settlements will be a subjective assessment of the noise of the flight of the demonstrator. Currently, flights of supersonic aircraft over a populated part of land are prohibited. The fact is that the glider of such aircraft at supersonic speed produces shock waves, which are perceived by the observers on the ground as an explosion.