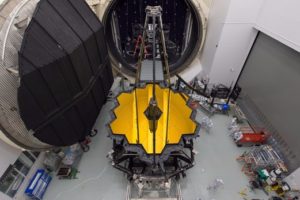 The US National Aeronautics and Space Administration (NASA) once again delayed the launch of the new telescope James Webb. The Managing Director of the department Robert Lightfoot announced that the observatory is scheduled to be sent the satellite into space in May 2020, which is an year later than expected.

“Work on all the main components of the telescope has been completed, but some of the problems that arise during their tests force us to reconsider the terms of launch”, said NASA in official statement.

According to Assistant Director of NASA Thomas Zurbuchen, the creators of the telescope “underestimated the technological complexity” of this project. “The process of assembling and testing individual components took longer than expected”, explained he. In addition, when testing the performance of a unique sun screen with size of a tennis court, breaks up to 10 cm in polyamide film.

“We have only one chance to do everything right before the device is launched into space”, said Thomas Zurbuchen. “Performing repair work in orbit, as was done in the case of the Hubble Observatory, will be impossible, if only because NASA already has no shuttles”, added he.

Robert Lightfoot found it necessary to pay attention to the fact that additional tests and transfer of the launch can lead to an increase in the cost of the project. In 2001, the US Congress set the standard for the creation of a telescope without taking into account the funds necessary for launching directly in the amount of 8 billion USD. NASA has already invested 7.3 billion USD in the project.

“Exceeding the cost limit will require Congress to decide on additional funding”, said Robert Lightfoot, promising to provide lawmakers with a detailed report on the schedule of work and the estimated costs in the summer.

A telescope named after James Webb, the head of the Apollo program, should replace in orbit Hubble. Initially, it was assumed that this would happen in 2013, but the design work was far behind schedule. Only in November 2016 the assembly of the main segments of James Webb was completed and it was announced that the NASA experts are now beginning their ground tests in order to launch into orbit in October 2018. At the end of September last year, the launch was postponed to March-June 2019.

A mirror with a diameter of 6.5 m is installed at the observatory. It is supposed to be taken far beyond the Moon, into an orbit about 1.6 million km from the Earth’s surface.

James Webb will study the oldest stars in the universe and galaxies formed after the Big Bang, as well as to search for potentially suitable for life planets. The estimated period of its operation is 10 years.