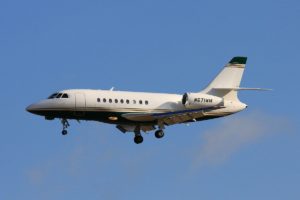 Business jet Falcon almost crashed with passenger Boeing in the sky over the Rostov region in Russia. The incident occurred yesterday evening. The passenger airliner was performing a flight from Istanbul to Moscow, while the business jet Falcon was taking off. According to the officials from Russian air traffic agency, the vertical distance between the liners did not exceed 350 meters.

“The commander of the airliner contacted the dispatchers and reported on a warning about a dangerous approach to the Falcon business jet, following a heading southward”, says the statement of the Russian air traffic agency. “The crew of the liner urgently gained altitude to avoid potential danger. The aircraft safely dispersed”, adds the statement.

Fortunately, the near-miss did not cause any collision or more serious accident. The investigation for the accident is underway.

No more details were revealed.