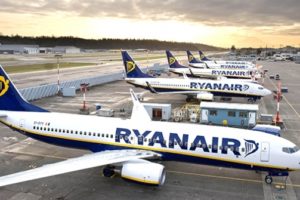 The net profit of Ryanair increased by 55% yoy in Q2 2017 to 397 million EUR. The company reports that revenue increased by 13% to 1.91 billion EUR. Ryanair made 12.80 EUR profit from every passenger it carried in the three months to June, which up more than 3.40 EUR per head on the same time an year ago.

The number of passengers carried increased by 13% and reached 35 million people. The average ticket price grew by 1% to 40.30 EUR, while the net margin increased by 6 percentage points to 21%.

With packed planes, Ryanair raised to 131 million from 130 million its projection for passengers it will carry for the full year. Even so, the airline stuck to its outlook that ticket prices in the first half, including the busy July-September travel period, could fall on average 5%, and be down 8% in the October-March period.

The figures rose, despite the unprofitable rate of the pound sterling for the company and the decrease in revenue from the sale of additional luggage space.