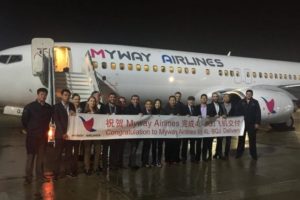 The new Georgian airline, MyWay Airlines, starts flights from Tbilisi to several new destinations to Europe and Asia from April 2018. The company was established by joint funding of local and Chinese investors. My Way Airlines is in the process of completing its AOC certification with the Georgian civil aviation authority (GCAA). It is backed by China’s Hualing Group with plans to offer regional Asian and European flights initially before branching off into the long-haul niche to North America.

The airline will offer users attractive prices. In the future MyWay Airlines will consider the possibility of flying to the European countries and the United Arab Emirates.

“It is of crucial importance that Hualing Group will introduce a new airline that has already passed registration in Georgia. Two airplanes of Boeing 737 and one Boeing 777 airplane will perform direct flights to Europe and Asia, later to the USA”, said the Economy Ministerof Georgia, Dimitrki Kumsishvili.

Currently the company has two Boeing 737, but expects to receive long-haul planes Boeing 777 in the near future.