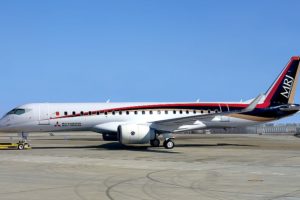 The tests are held in Washington State on the basis of the Japanese company Mitsubishi Aircraft. The aircraft will check the engine in various modes, as well as other systems. Over the course of the year, two more MRJs will also fly to the United States to participate in the trials.

The liner certification process is scheduled to be completed next year. After that, as expected, it will start flying for the airlines.

The Mitsubishi Regional Jet is the first Japanese-made passenger aircraft in more than 50 years. It has a flight range from 1,500 to 3,400 km. Depending on the modification of the aircraft is able to take on board up to 90 passengers.

The development of the liner has been conducted since 2007. It was reported that in total there are orders for 407 aircraft for a total amount from airlines in Japan, other Asian countries and the United States. Special hopes for MRJ are laid by the main Japanese carriers, Japan Airlines, and All Nippon Airways, hoping with its help to resume some domestic flights that they had previously abandoned.