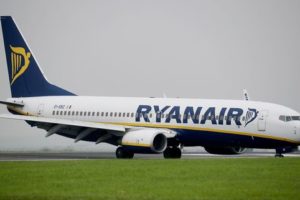 The new operating officer of the airline Ryanair gave ultimatum to the pilots either to accept proposed wage increase or to leave the company. He sent a letter to the employees of the company with new proposals, asking them to answer and agree with the new features. In more detail, the company offered pilots an annual increase of net wages of up to 22,000 EUR for the captains and 11,000 EUR for first officers.

The Chief People Officer Edward Wilson refused to employees to split contracts for each country and the recognition of the “European Representative Pilot Committee”, a kind of trade union of air carrier employees.

“If pilots continue to be misled by the false promises of unions, then you will delay or miss out on these big pay increases next month”, said the Chief People Officer, Edward Wilson.

However, the management specifies that the amount of wages will not be the same for all pilots. A multinational company does not accept a centralized payout system in all 30 countries: employees in Dublin and Athens are paid different salaries.

However, the majority of flight crew at the budget carrier’s biggest base voted against a deal from Chief Executive Officer Michael O’Leary.

Many of Ryanair’s pilots are employed as external contractors under Irish labor law, a crucial part of the Dublin-based company’s ability to operate at lower costs than competitors. Cockpit crew are seeking permanent contracts and benefits in line with local conditions.