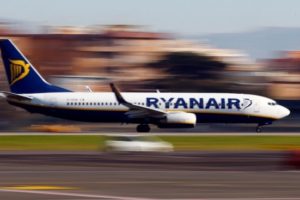 The Irish low-cost carrier Ryanair cancels 150 of 400 flights to and from Germany on Wednesday, September 12, due to strike by pilots and cabin crew. The Cockpit trade union called for a 24-hour strike, which is expected to begin at 01:00 GMT.

The strikes were announced late last night, and today Ryanair has called for pilots to go to work because “we have already offered local contracts and we have improved our salaries, there is no justification for new business violations”.

In August, strike of Ryanair pilots in several European countries, forced the company to cancel 400 flights.

Airline customers whose flights will be canceled tomorrow will be notified by email. They will be able to transfer their trips free of charge between Thursday and Sunday (September 13-16).

The company harshly denounced the strike, noting that it could only harm Ryanair’s business and some of its bases in Germany, as well as lead to a reduction in aircraft and jobs on the German market this winter.