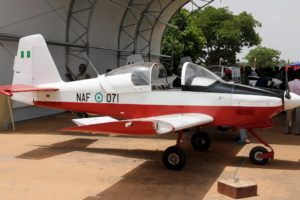 Nigerian Air Force aircraft RV-6A Air Beetle crashed near Kaduna, killing the pilot. The plane was on a missing, but due to uncertain circumstances lost height and crashed near the city. During the accident there was only one person on board, who was experienced instructor. The accident was reported to local authorities and at the scene were sent rescuers, but unfortunately the pilot was already dead.

“A Nigerian Air Force (NAF) Air Beetle Aircraft today crashed in Kaduna while on a mission”, says the statement of an Air Force spokesman, Air Commodore Olatokunbo Adesanya. “The cause of the incident is unknown but the Chief of the Air Staff (CAS) has immediately directed the constitution of a board of inquiry to determine the immediate and remote causes of the crash”, added he.

The Air Force stated that the unfortunate incident is a tragic reminder of the hazards associated with the flying profession.

Van’s RV-6 and RV-6A are two-seat, single-engine, low-wing homebuilt airplanes sold in kit form by Van’s Aircraft. The RV-6 is the tail-wheel equipped version while the RV-6A features a nose-wheel. The RV-6 was the first aircraft in the popular Van’s RV series to feature side-by-side seating and the first to offer a nosewheel option. It was first flown in 1985. Over 2500 kits have been completed and flown.