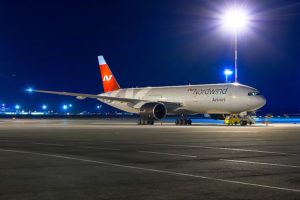 Nord Wing aircraft Boeing 777-200 abandoned takeoff from Irkutsk Airport after problem with one of the engines. The aircraft was performing charter flight to Phuket Island (Thailand) with 427 passengers on board, but during the acceleration to take off one of the engines was surging. The crew decided to stop the takeoff and taxied back to the terminal. There were no reported injuries during the incident. All the passengers were disembarked and hosted in a hotel.

The flight was canceled until further repair of the aircraft. The engineers inspected the problem with one of the Boeing’s engines but failed to fix the problem.

Replacement aircraft was sent from Rostov and the flight was scheduled for 19:00 local time.