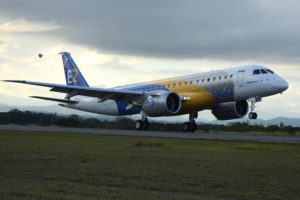 The Brazilian aircraft manufacturing company Embraer has signed a firm contract for three E190 aircraft with Nordic Aviation Capital (NAC), the world leader in the leasing of regional aircraft.

This contract was first announced in the form of signing an agreement of intent in July 2018 at the Farnborough air show. The total value of a firm contract is 156 million USD at catalogue prices.

These new aircraft will join the existing 155 E-Jets currently owned by NAC.

Embraer has 100 customers worldwide operating the ERJ and E-Jets family jets. Just for the E-Jets program, the company has registered nearly 1,800 firm orders and more than 1,400 deliveries.