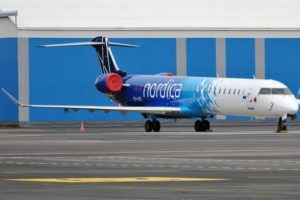 Estonian airline Nordica strongly refutes speculations about the poor condition of its aircraft fleet, which was rumored after large percentage of delays and cancellation of flights. Because of frequent problems, the local media and experts alerted that the aircraft of the airline are in a bad condition and serious misfortunes are just a matter of time.

This week, an airplane of Nordica departed from Tallinn to Kiev and after a short time in the air returned back to the Ukrainian capital airport. The airline reported that the aircraft diverted due to technical malfunction. Earlier it was also reported that Nordica canceled 12 flights due to various problems without reporting the reason.

The head of communications and sales of the Estonian airline Nordica, Toomas Uibo, argues that in the European Union it is not possible an airplane to fly with problems. He also added that the engines of the aircraft change on time, and the maintenance programs for the aircraft are the same for all – old and new airplanes.

Nordica is the state-owned Estonian flag carrier headquartered in Tallinn and based at Tallinn Airport. It is the largest air carrier at its home base and formed after the 2015 bankruptcy of the previous flag carrier Estonian Air.