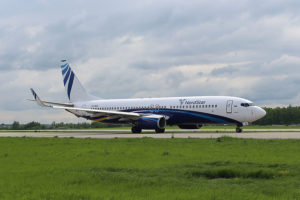 NordStar Airlines plane Boeing 737-800, performing flight Y7217/YA217 from Krasnoyarsk to Norilsk with 101 passenger and 6 crew members, suffered a runway excursion after landing at Alykel Airport in Norilsk in the Krasnoyarsk Krai region of Russia. After landing in a heavy snowstorm the Boeing 737-800S, could not stop after the end of the runway, slightly rolling it out and end in the safety lane. None of the passengers and crew members was injured and no damage was reported to the aircraft.

The passengers were able to disembark from the plane themselves.

According to preliminary data, the meteorological conditions at the Norilsk airport were a concomitant cause of the runway excursion. The investigation for the root cause of the accident is underway.