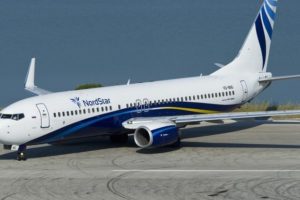 Boeing 737-300 of NordStar airline made an emergency landing in Volgograd after a passenger lost consciousness. The aircraft was performing a flight from Makhachkala to Moscow with 145 passengers on board. The ambulance arrived at the parking lot within 10 minutes after landing. The woman, who lost consciousness, was given first aid. After that she refused hospitalization and continued the flight on the same aircraft with destination Moscow.

“The emergency landing of the Boeing 737-300 was made on August 20 at 12:52 local time. During the flight one of the passengers lost consciousness. On board there were 145 people”, says the report of the airport.

A few minutes later, the aircraft took-off and resumed the flight to Moscow, where safely landed at 15:20 local time.

Boeing 737 is a short- to medium-range twinjet narrow-body airliner. Originally developed as a shorter, lower-cost twin-engine airliner derived from the 707 and 727, the 737 has developed into a family of ten passenger models with capacities from 85 to 215 passengers. The 737 is Boeing’s only narrow-body airliner in production, with the 737 Next Generation (-700, -800, and -900ER) and the re-engined and redesigned 737 MAX variants currently being built.