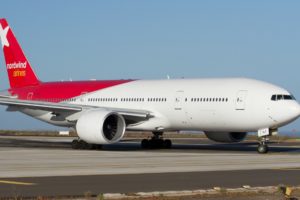 Nordwind continues to expand its fleet of wide-body aircraft following the strategy of implementing a feeder transportation to 200 areas of autumn-winter season. The airline is preparing for the launching in operations of two Boeing 777-300 airplanes.

“The first Boeing 777-300 arrived at Sheremetyevo International Airport on September 1 and after the customs procedures will be put into operation on charter flights from Moscow. The second plane will be delivered in the same way within the next week”, said the airline Nordwind.

For the first time, the salon was made in a three-class arrangement at 312 seats, including 38 business-class seats, 63 economy-class premium seats and 211 economy-class seats. In the cabin there is a personal entertainment system. Passenger seats are designed by Koito, offering high comfortability and really great luxury during traveling.

Thus, in the park of the airline Nordwind there consist of 22 aircraft, 6 of which are Boeing 777. By the end of 2017, another 4 aircraft are expected to arrive.

Boeing 777 is a family of long-range wide-body twin-engine jet airliners developed and manufactured by Boeing Commercial Airplanes. It is the world’s largest twinjet and has a typical seating capacity of 314 to 396 passengers, with a range of 5,240 to 8,555 nautical miles.