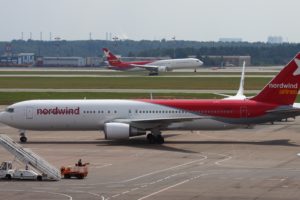 The airline Nordwind received a new type of wide-body aircraft Airbus A330, as part of the program to expand the regular route network and increase its fleet. The two airplanes arrived in the airlines flight base at Sheremetyevo International Airport, where were presented to the journalists.

The presentation program provided for video shooting of the Airbus A330 with number VP-BYU, as well as a briefing on board with commercial director of the airline Nordwind, Imran Nazarov. The transfer of the second aircraft under the number VP-BYV in a solemn atmosphere was performed by the head of the Airbus representative office in Russia.

The liners are equipped with a business class salon for 24 seats with Weber Aircraft seats and is designed for comfortable transportation of 279 passengers. The seats in the economy class are designed by Zodiac Seats and equipped with a personal entertainment system. The aircraft will perform regular flights on the route Moscow-Irkutsk and Moscow-Khabarovsk immediately after receiving a decision of the Russian Aviation Authorities Commission on the admission of a new type to commercial operation by the airline.

“We are confident that the emergence of comfortable Airbus A330 aircraft in Nordwind’s fleet will contribute to the development of transport accessibility for the residents of Eastern Siberia and will have an impact on the implementation of the federal program for the social and economic development of the Far East. Nordwind plans to further increase the number of wide-body aircraft, Open new long-haul destinations”, said the airline Nordwind.

Nordwind Airlines, LLC is a Russian scheduled and charter airline. The company is headquartered in Moscow, with its main hub at Sheremetyevo International Airport.