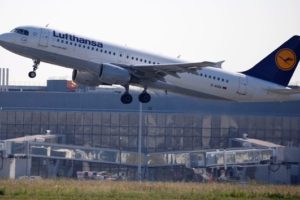 German airline Lufthansa raised its forecast for airfares by the end of the year after the termination of Air Berlin’s operations led to more demand for North Atlantic routes. The airline said it expects a slight increase in revenue over a previous forecast to keep it unchanged.

Although the short-distance competitors like easyJet, Ryanair and Laudamotion struggle to fill the gap left by Air Berlin on routes outside Germany and Austria, Lufthansa continues to dominate the more profitable long-distance routes.

The shares of the German airline rose by 7.58% in the early afternoon on Tuesday, which is the biggest daily increase in a year and a half.

Despite the higher expectations for ticket prices, the costs for expanding its budget airline Eurowings and higher fuel prices mean that Lufthansa’s net profit will not increase.

The airline maintained its expectations that its 2018 earnings before interest and taxes will see a slight decline from a record level in 2017 to 2.97 billion EUR (3.48 billion USD). The company downgraded its growth forecast this year to 8% compared with 8.5% previously, the main reason being Eurowings.

Lufthansa Chief Financial Officer Ulrik Svensson said the process of bringing about 77 aircraft to the failed Air Berlin rival to the company’s standards took longer than expected, which led to delays and cancellations.

Eurowings will not make a profit this year, but the target is to turn on green next year.

The airline announced that its operating profit in Q2 2018 had reached 982 million EUR against expectations of 942 million EUR.