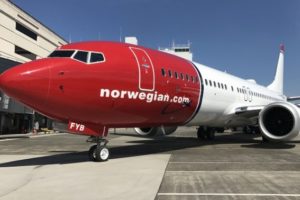 The Norwegian Air Boeing 737 aircraft, carrying 169 people aboard, landed by an emergency at Stockholm Arlanda Airport in Sweden, after a bomb threat. The aircraft was performing flight DY4321 en route from Stockholm to Nice, France, but shortly after takeoff was forced to return to the airport of departure amid message for a bomb on board.

“The message about the explosive device on board came to the flight control center in Malmo in the south of the country almost immediately after the departure of the flight from Arlanda. At this time, the plane was already above the city Vaxjo, but the pilot decided to return to the Stockholm Arlanda Airport”, says the official statement of the airline.

Passengers and crew members were evacuated from the aircraft at the taxiway and bussed to the terminal. Police officers and firefighters were sent to the aircraft, inspecting the airplane and searching for explosive devices.

“The national bomb squad will shortly begin a search of the plane”, the police said in a statement.

After inspecting, it was estimated that no explosives were found on board of the aircraft