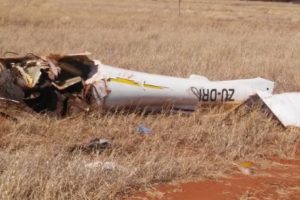 One dead after aircraft Jabiru J450 crashed near Enkelfontein farm in Limpopo, South Africa. The aircraft took off from Zwartwater farm en route to Gauteng province, but shortly after departure lost control and its front end crashed to the ground in the bushes around Enkelfontein farm. The pilot died at the crash.

The investigation for the root cause of the accident is being handled by both the South African Police Service and the Civil Aviation Authority.

“Within a few minutes after his departure‚ the aircraft lost control and its front end crashed to the ground in the bushes around Enkelfontein farm‚ killing the pilot instantly”, said Colonel Moatshe Ngoepe. he added that the victim was identified by family as Koot Human Steyn‚ 54‚ from Zwartwater farm in the Tom Burke policing precinct outside Lephalale. The cause of the accident is still unknown at this stage.

The Jabiru J-450 is 4-seater ultralight aircraft, which has been designed to meet the US Light Sport category. The aircraft is used in sports aviation, as well as agriculture industry.