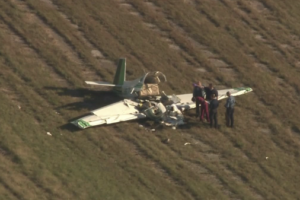 One dead after light aircraft Mooney M20C crashed at Woodbine Airport in New Jersey, USA. The accident happened during takeoff from the airport, but failed to gain speed, stalled and impacted the ground. The accident was immediately reported to the local authorities and at the scene were sent medical teams and police officers. Unfortunately, the pilot was found dead within the debris of the aircraft, which suffered serious damages.

The investigation for the root cause of the accident is under way. The accident has been reported to the National Transportation Safety Board and Federal Aviation Administration.

More information for the accident is not yet revealed.

Mooney M20 is a family of piston-powered, propeller-driven, general aviation aircraft, all featuring low wings and tricycle gear, manufactured by the Mooney International Corporation. The M20 was the 20th design from Al Mooney, and his most successful. Mooney M20 is low-wing aircraft, and the wing skin is aluminum. Slotted flaps cover 70% of the trailing edge. Earlier models use a hydraulic hand pump to extend the flaps, while later models have electrically operated flaps.