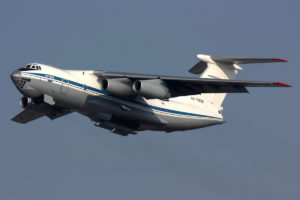 One kid was killed and four people were injured in Juba in South Sudan during accident with Trans Avia Export Cargo Airlines plane Ilyushin IL-76, which destroys two houses during go around. The aircraft was performing flight on behalf of World Food Programme by United Nations, carrying load of food, which was air dropped in Jiech, South Sudan. The airplane was approaching back to Juba in poor weather conditions, but after broke through the clouds was in danger from residential buildings. The crew initiated a go around, but the aircraft impacted a tree and completely destroying a house, while the jetblast off the engines damaged another house. Following the accident a 5-year-old girl was killed and 4 other people, including two children, were injured in the two damaged houses.

The aircraft Ilyushin IL-76 climbed out to safety and diverted to Entebbe in Uganda, where the crew performed an emergency landing. The main gear collapsed during landing in Entebbe as result of the damage received in Juba.

WFP South Sudan reported about the accident and sent their biggest regrets to the affected families. According to them, the accident happened as result of thunderstorms and heavy rain which impaired visibility on approach to Juba.

A ground witness reported that the aircraft Ilyushin IL-76 was not aligned with the runway center line when it descended through the clouds in about southeasterly landing direction, but abeam of the runway center line. The crew initiated a go around but struck and destroyed a house and subsequently climbed and headed away.

Ilyushin IL-76 is a multi-purpose four-engine turbofan strategic airlifter designed by the Soviet Union’s Ilyushin design bureau. It was first planned as a commercial freighter in 1967, as a replacement for the Antonov An-12. It was designed to deliver heavy machinery to remote, poorly served areas. The IL-76 has seen extensive service as a commercial freighter for ramp-delivered cargo, especially for outsized or heavy items unable to be otherwise carried. It has also been used as an emergency response transport for civilian evacuations as well as for humanitarian aid and disaster relief around the world. Because of its ability to operate from unpaved runways, it has been useful in undeveloped areas.