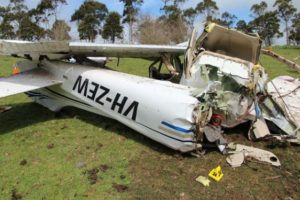 The pilot of an aircraft Cessna 172P Skyhawk died in a crash near Morongo Valley, USA. The airplane impacted secluded area near Morongo Valley approx 12 miles north-northwest of the Palm Springs International Airport shortly after takeoff. The aircraft sustained significant damages and the sole pilot on board died from the received injuries.

The circumstances around the air crash are unclear and the investigation is underway. According to the weather forecast, in the area, there were gusty winds of about 50 mph, but it is not yet clear if it caused the crash. The site is barely accessible and the recovery efforts continue today.

According to the local authorities, the plane departed San Gabriel Valley Airport about 5:30 p.m. Tuesday for North Las Vegas Airport. It crashed about 6:15 p.m. in an area that’s about 12 miles north-northwest of the Palm Springs International Airport.

Cessna 172 Skyhawk is an American four-seat, single-engine, high wing, fixed-wing aircraft made by the Cessna Aircraft Company. First flown in 1955, more 172s have been built than any other aircraft.