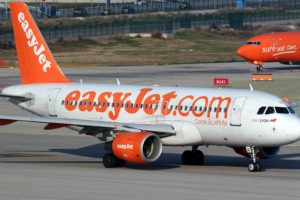 Easyjet Switzerland aircraft Airbus A319-100 encountered severe turbulence near Basel, which caused injury of one cabin crew. The airplane was en route from Olbia (Italy) to Basel/Mulhouse (Switzerland/France) with 150 passengers and 6 crew, but during descending towards destination airport, entered into zone with unexpected turbulence. This caused a vertical acceleration of +2.33G leading to the fall of a flight attendant receiving a serious injury. The aircraft Airbus A319 proceeded for safe landing at Basel airport, where landed 15 minutes later. All the people were safe and without other reported injuries.

The Airbus A319 is a member of the Airbus A320 family of short- to medium-range, narrow-body, commercial passenger twin-engine jet airliners manufactured by Airbus. The A319 carries up to 160 passengers and has a maximum range of 3,700 nmi (6,900 km; 4,300 mi). Final assembly of the aircraft takes place in Hamburg, Germany and Tianjin, China. The A319 is a shortened-fuselage variant of the Airbus A320 and entered service in April 1996, around two years after the stretched Airbus A321 and eight years after the original A320. The aircraft shares a common type rating with all other Airbus A320 family variants, allowing existing A320 family pilots to fly the aircraft without the need for further training.